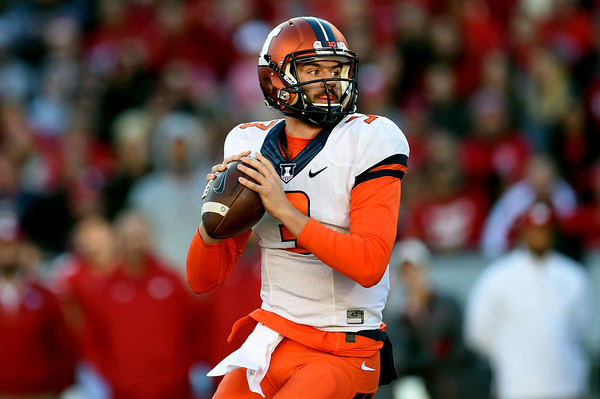 Chayce Crouch Out as QB at Illinois

By Mihir Chavan in big 10, College, football, Illinois, Sports on October 2, 2017
No comments

via: The Champaign Room

Lovie Smith announced at Monday’s press conference that Illinois will be seeing a change at the quarterback position.

“We have to put the best group together to play football this week,” Smith said. “Some positions you try to stay the course as much as you can, but there is a lot things we aren’t doing right and to make that next step we need to make that change.”

Chayce Crouch has started at quarterback for the first four games of Illinois’ season, leading the Illini to a 2-2 start. Since the beginning of the offseason and throughout spring practices Crouch had been named to the starting position and the team practiced in anticipation of him leading the offense.

Crouch appeared in four games in 2016, completing 18-of-32 passes for 249 yards and one touchdown. His breakout performance came in last season’s game against Purdue when he relieved an injured Wes Lunt and threw for 142 yards and added 137 on the ground, making him the first Fighting Illini QB with a 100-plus yard rushing game since Reilly O’Toole in 2014.

He made his first-career start against Rutgers, where he then suffered a season-ending shoulder injury. This season Crouch was underperforming with 427 total passing yards and four interceptions. Praised for his dual-threat abilities during the offseason, Crouch has managed only 93 yards rushing this season.

Smith said during the press conference that Jeff George Jr. has moved into the top position on the depth chart heading into practice this week. True freshman Cam Thomas will move into the second spot.

George Jr. started four games during the 2016 season, including one win over defending-College Football Playoff semifinalist Michigan State. The first glimpse of George Jr. this season came in the third quarter of Illinois’ 47-23 loss at South Florida after Crouch was benched. George Jr. went on to throw for 211 yards and two touchdowns.

The change for Illinois comes with a lack of production on the receiving end, as both Malik Turner and Mike Dudek have struggled to get involved.

“We watched the film over and over and over, we have been around awhile, training camp, every day,” McGee Said. “It’s definitely necessary, it’ll give us an opportunity to push the ball down the field and use all of our weapons.”

“I’ve been told I’m the guy,” said Couch after the game.

Clearly, Crouch is no longer the guy.

Illinois fans can rejoice, hopefully the Crouch era is over. Crouch is 44/71 for 427 yards, 1 TD and 2 INTs. On the ground the “dual threat” QB has only 93 yards and 1 TD. 4 games into the season, this is not what you want to see out of the starting QB. It is unsure if Crouch’s benching will be for more than 1 game. However lets see what the bench looks like with Jeff George moving to the starting spot.

Jeff George Jr. played in 5 games last year after Wes Lunt and Chayse Crouch went down with injuries. With his 4 starts last year, he is the clear 1st string. However, outside of the win against a 0-6 Michigan State on Dad’s Day, George only led the Illini to 28 points. He has shown a spark this year and hopefully he can create long drives and keep the offense on the feild.

Thomas is a 3 star recruit from Chicago Heights, Illinois. He is a dual threat, pro-style QB that fits well into Lovie’s offense. Thomas was suspended prior to the Nebraska game, but has now moved up into the backup position. He can create his own plays when the offense brakes down and make plays out of the pocket.

Cam Miller red-shirted last year, but in his senior year of high school, he had over 3000 yards and 36 TD’s in the Chicago Catholic League. Doubtful we wold see him this year, but he does add a depth and passing ability that we have yet to see from any QB this year.

Reinkemeyer redshirted this season and Connor Kelly is a walk-on. It will be difficult for both to see any action this year.

There is definately a QB controversy brewing in Champaign. Jeff George is going to have a tough time at Kinnick this Saturday against the Iowa Hawkeyes.