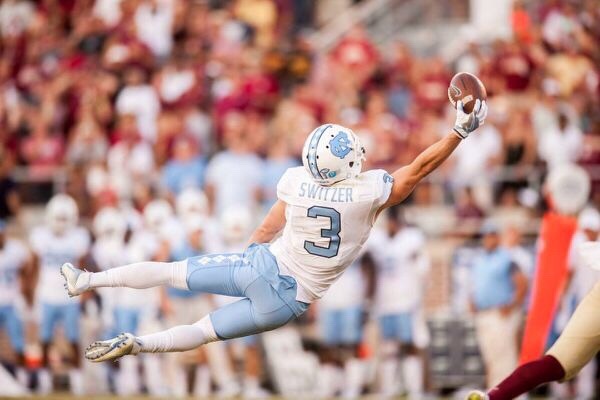 The college football season is probably the best time of the year. Some may argue that CFB fails to compare to the NFL, but in terms of betting on games, CFB is easy money. With that said, here are my 5 bets to place this weekend if you want to make some money.

The college football season is probably the best time of the year. Some may argue that CFB fails to compare to the NFL, but in terms of betting on games, CFB is easy money. With that said, here are my 5 bets to place this weekend if you want to make some money. I use MyBookie.ag, so those are the lines I will use.

Last week, TLS went 2-3. Not a good week, and if you bet a unit like we did, you were down 1.18 units. As it happened last week, lines could change. I will update if lines move more than 1 point. TLS Season Record: 15-11

Yea what ever, this is going with the public and Louiville did beat the Wolfpack last year 54-13. But this year, the Cardinals are completely different. Outside of reigning Heisman winner, Lamar Jackson, Louisville has no star players. NC State has owned the turnover margin this year with +6 on the year. NC State should be able to hold back number 8, and avoid an upset like last year.

From what we know, Penn State can run up the score. Northwestern doesn’t have a stout front 7 like Iowa and has given up 145 yards/game and 6 TDs. Penn State and Saquan Barkley will be sure to abuse the Northwestern D-line. However, Northwestern can score the ball. Last week against Wisconsin, it was a close game against and a 1 score game late in the 4th quarter. But the Nittany Lion Defense is too good. Saquan Barkley is easily a shoe in for the Heisman. Lions win big, but Northwestern puts up a fight.

Lock of the week. Florida finally has found its rythem. LSU lost theirs. The Tigers were stunned at home last week after losing to FCS Troy. They now go into the Swamp and face the hungry Gators. This is an SEC rivalry game, but LSU is not the same team this year. Florida’s defense will stifle Danny Etling. Florda runs past LSU.

Over the past few years, this has been one of the best rivalry games. Michigan State also has covered the spread in the last 9 games. Last year a 2-7 MIchigan State was bale to to keep it close with the Wolverines. This year, State looks a bit better after beating Iowa at home. Michigan, although ranked, has not been impressive. Spartans keep it close, and have a chance to win the game.

Kent State averages 11 points a game and NIU has a stellar defense for the MAC conference. NIU wins homecoming in a blowout. Kent State is on its 2nd strong QB that has yet to throw a TD.