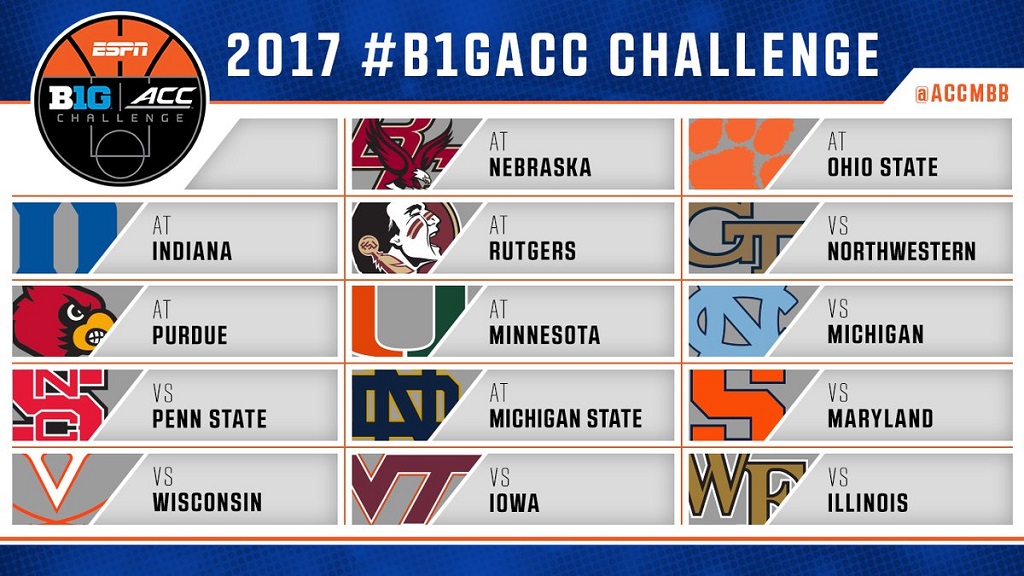 By Mihir Chavan in basketball, big 10, College, Illinois, Sports on November 29, 2017
No comments

Huge Day for basketball and outside of the holiday tournaments, the ACC/Big 10 Challenge is one of the most fierce rivalries in basketball. With the Big 10 down 1-6 after Day 2, the ACC needs 2 more wins to win the challenge. Big day for basketball today with a full slate of games starting at 6:15 PM CT.

Penn State was beat handily by Texas A&M and NC State is coming of a 2 game losing streak, losing to Northern Iowa and Tennessee in the Battle for Atlantis after beating then #2 Arizona. Huge test for the Nittany Lions who are let by Tony Carr who is averaging 20 points a game. Both teams have similar pace and offensive rating. This should be a very exciting game to start off Wednesday night.

Clemson has had a strong start but lost to Temple last week. Ohio State isn’t much better, losing to Butler in overtime and getting blown out by Gonzaga in the PK80 over the holiday weekend. Both teams have a common opponent and beat Texas Southern. Forward Keita Bates-Diop, averaging a double double for OSU will be the X-factor in this game.

Line: The line has been moving heavily in favor of Clemson. OSU -5.5 over Clemson. However, if it drops to 3 or 2 points, snatch it, OSU will win.

Michigan has one of the slowest paces in the country and ranks in the bottom 10. North Carolina comes in ranked in at 34th fastest pace in the country. North Carolina looked like it was finding its rhythm until getting blown out by Michigan State on Sunday in the PK 80. Michigan will have to replicate its little brother’s formula and slow down the pace if the Wolverine’s want to beat the Tarheels.

Line: The value of the ML is unbeatable. Expect Michigan to slow the pace and at least cover. Michigan +9.5 over the Heels

Easily the best game of the day. Minnesota has rallied behind junior Forward Jordan Murphy who is averaging 22 points and 12.3 rebounds a game. Although Miami is a top 10 team, they have not been tested in yet. Minnesota has the talent and the athleticism to win at home.

When talking about basketball, nobody has their eyes on Boston College and Nebraska. Neither team has a stand out win, and lost to March Madness mid-majors like Providence and Saint Johns. With the Miami and Minnesota game tipping of at the same time, you would better be watching that. Neither team puts up numbers. However both teams have played toe to toe in the challenge for the last couple years.

Duke in the best team in the country, hands down. Freshman Forward Marvin Bagley III is averaging 22.3 points and 11.3 rebounds a game, and leads 4 other Blue Devils that average double figures in scoring a game. Duke has a top 15 offensive rating and already have 2 top 10 wins on the season. Duke is also 16-2 in the challenge and the last time Duke lost was in 2011 against #2 Ohio State.

Line: Duke Loves to score and push the ball. Indiana is at home. Will be a very exciting game. Over 153.5