Big changes for 2 struggling programs in the B1G West.

Today we go through the coaching changes in the Big Ten West.

The most exciting news in the Big Ten was the Nebraska Cornhuskers hiring Scott Frost from the 2018 National Champions UCF Knights. The move was predicted as tensions in Lincoln grew between last years Head Coach Mike Riley and Nebraska. Frost played under legendary Husker Coach Tom Osborne, who had some very nice words for the new head coach. Nebraska went through a down period for about 15 years, where even a perennial 9-3 coach, Bo Pelini, produced too little for the Big Red. In Frost’s 2 years at UCF, he took them from 0-12 to 13-0, a turn around many Cornhusker fans are hoping for next year. Frost is bringing his entire staff from UCF, which allows him to stay focused on the one thing that will turn the Big Red around: recruiting. 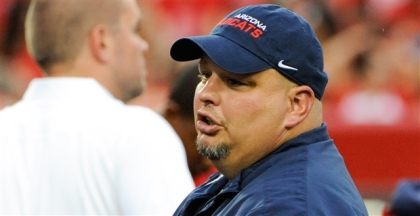 Illinois also had big changes take place after an atrocious 2-10 2017 season. After the season ended, Illinois was swift to fire OC Garrick McGee and Defensive Backs coach Paul Williams. Last week we learned that McGee would be replaced by Arizona OC, Rod Smith. Smith’s Arizona offense ranked 5th in points, 3rd in rushing yards, 101st in passing yards, and 12th in total offense last year. Last year Illinois was 127th (out of 130), 123rd, 107th and 127th in the same categories. Rod Smith will be a huge change to the Illini offense. Last year, 3 freshman, RB Mike Epstien, RB Ra’Von Bonner, QB Cam Thomas led the Illini in rushing, while playing in a combined 15 games. Smith’s run heavy option will fit great with the Illini’s current players. With majority of the offensive line having a full season under their belt, Illinois should be able to open up running lanes, especially with 4-star OL Verdis Brown coming to Champaign next year. Smith also had previous experience in the B1G, coaching QB’s at Indiana and Michigan. Solid Hire.

Coaching has been stable elsewhere around the B1G West with internal changes at rest of the schools. If I missed anything, tweet @thelastsnap_. Tomorrow we look at the B1G East, is Harbaugh on the hot seat?