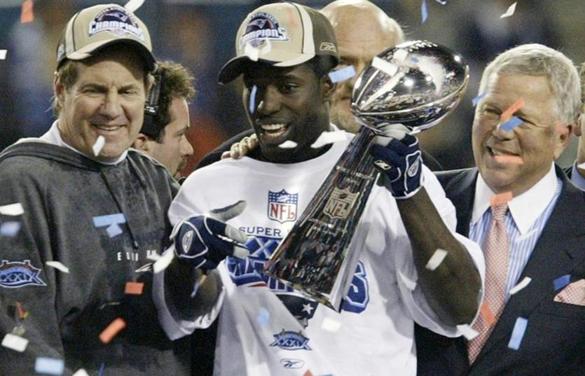 The Patriots and Eagles last met in the Superbowl in 2004. Who won?

On Sunday, February 4th, the New England Patriots will face the Philadelphia Eagles for Superbowl LII in Minneapolis, Minnesota. But you already knew that. For the first blog in Superbowl Week, let’s rewind the clock a bit and look at the last time the teams met in Superbowl XXXIX in Jacksonville, FL.

The 2004-2005 season was key in starting the Patriots dynasty. The Patriots had won Superbowl XXXVIII and were looking to win their 3rd Superbowl in 4 years. Led by Pro Bowl QB Tom Brady, the Pats already had the advantage heading into the season. In the off season, they picked up star running back Corey Dillon from the Cincinnati Bengals. Dillon made an instant impact in evolving the Patriots offensive game. The veteran back ran for 1635 yards and 12 TDs. Brady led the passing game and threw for 3,692 yards, 28 TDs and 14 interceptions, even with veteran WR Deion Branch out for most of the season. The Pats had holes in their defense, but their offensive dominance set records for most consecutive regular season victories (18) and consecutive victories (24).

The Eagles were dominant at the turn of the millennium, reaching the NFC championship game 4 years in a row, but this was their first time in the Superbowl since 1981. The Eagles were led by QB Donovan McNabb who threw for 3,875 yards, 31 TDs and 8 interceptions in the season. In the off season, the Eagles traded for Terrell Owens from the San Francisco 49ers. Owens was the league’s best deep ball threat and caught 77 passes for 1200 yards and 14 TDs. However Owens was injured after a horse collar tackle against the Dallas Cowboys in December and would miss the rest of the season.

Before the game, Owens was cleared to play, even with 2 screws and a plate holding together his ankle. Much like this year, the Patriots were going to lose their offensive coordinator, Charlie Weis to Notre Dame and their defensive coordinator Romeo Crennel to the Cleveland Browns.

The Eagles defense was strong once again, forced a punt that started their first drive of the second quarter at their own 19 yard line. McNabb would then lead an 81 yard drive, ending with a 9 yard pass to TE LJ Smith in the end zone. The ball would then change position 2 times and with 1:10 left in the half, Brady even the score with a 4 yard pass to WR David Givens. The score was tied at 7.

Paul McCartney sang the halftime performance, and kept it SFW unlike the previous year.

The Pats, came out storming, leading by 10 points with 8:34 to go on a 22 yard field goal by Adam Vinatieri. Vinatieri’s feild goal was set up by this stunning catch by Deion Branch. Eagles, playing comeback were intercepted in the following play but forced the Pats to punt with 5:40 left in the game. The Eagles then drove the ball 79 yards to score a TD and brought the score within the field goal. But with Andy Reid’s classic mismanagement of the late game clock, the drive took 3:52 which left 1:48 on the clock. The Eagles were unable to recover the onside kick and the rest is history. Patriots won 24-21 and joined the Cowboys as the only team to win 3 Superbowls in 4 years. Deion Branch would end up winning the superbowl MVP.

Tomorrow, we will cover the Patriots and take a look at how they ended up in Superbowl LII. Follow @thelastsnap_ for the latest blogs.