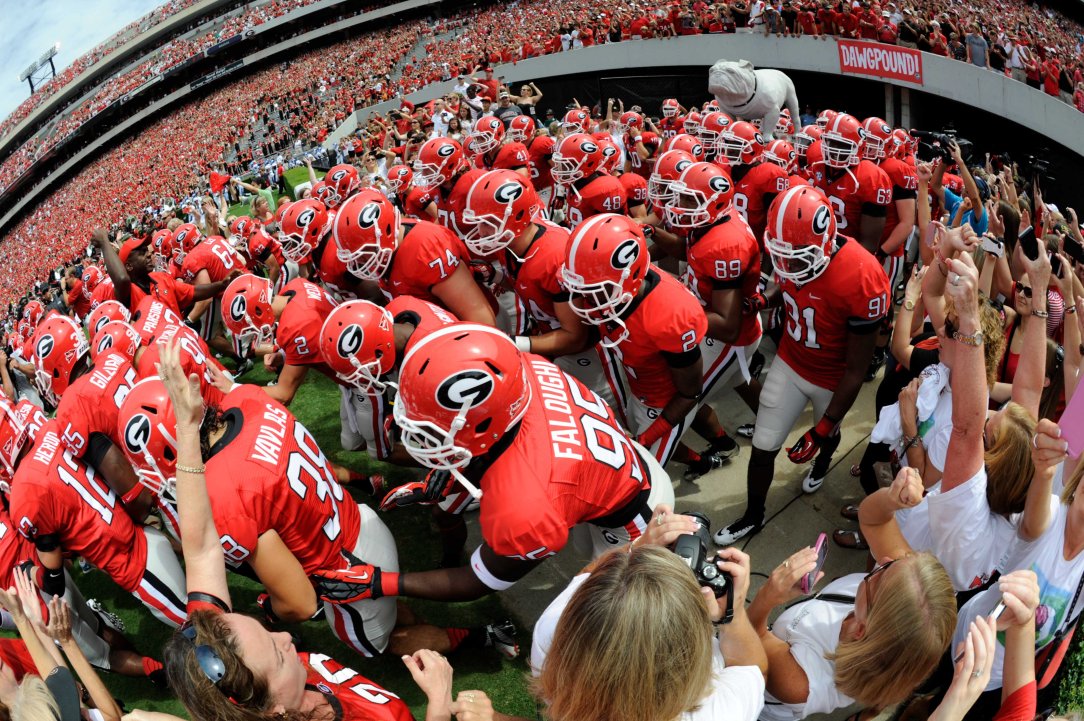 The Georgia Bulldogs have the best class in the country after grabbing 8 5-star recruits.

Oh boy did we have some drama happen today. Georgia just blew everybody out of the water and was sniping recruits from everybody. At the end of the day, the Bulldogs have, a record, 8 5-star recruits, 15 4-star recruits recruits, and 3 3-star recruits. Every single freshman next year will have at least 3 stars. Today, Georgia added 6 recruits including Otis Reese, who was at one point Michigan’s highest rated recruit. Reese is now the 11th best recruit for Georgia. Crazy how good this class is.

Then around noon, Georgia flipped former Tennessee and Alabama commit, Quay Walker. The 5-star recruit flipped last minute as he reached for a Tennesee hat, but threw it across the room and revealed his Georgia shirt underneath. Shortly after, the Dawgs added WR Tommy Bush, a 4-star wide receiver. and brought out a his infant niece to do so.

The bar has been set. Crying babies are now the newest prop in CFB commitments. pic.twitter.com/fnicvuGZSe

But enough talking about Georgia’s stunning class and see who else won the sweep stakes of National Signing Day 2018, and of course the losers.

Let’s just say, the entire state of Texas won today. Texas A&M made moves for Jimbo Fisher’s first recruiting class. Let’s just say, there will be no transition period for the Aggies and the team will hit the ground running in 2018. The Aggies climbed 16 positions in class rankings and have the 19th best Class in 2018. Today, the Aggies signed 11 new players to their class including flipping 4-star Defensive Tackle Bobby Brown from Alabama, flipping 4-star Offensive Guard Tank Jenkins (A+ name) from Oklahoma, 3-star QB James Foster followed Jimbo Fisher from FSU, 4-star Defensive End Jeremiah Martin and 4-star RB Jashaun Corbin. Most of the recruits were top recruits for Fisher from Florida State who stayed with the coach when he took the job with the Aggies.

Texas also stunned the masses today. The Longhorns now have the 3rd best recruiting class in 2018. Tom Herman landed 12 of the top 20 recruits in Texas, including two of the best Defensive Tackles in the state, Keondre Coburn and Moro Ojomo. Today, Tom Herman added Joseph Ossai, 4-star RB Keaontay Ingram and 4-star reciever Joshua Moore. Ossai s a natural athlete that fills out the Aggies depleted defense. Ingram adds depth to the Longhorn’s young backfield. Moore chose the Longhorns over Oregon and adds yet another target for young QB Sam Ehlinger who had just under 2000 yards and 11 TD’s last year. This is the most complete class that Texas has seen in quite a while, which begs for the question: Is Texas back?

Even with a new coach guiding the ship at Florida State, Willie Taggart was able to recruit a stunning 11th ranked class. FSU stole 2 top recruits from Tennesee, 3-star running back Anthony Grant and 3-star receiver Jordan Young. FSU also stole 4-star athlete, Tre’Shaun Harrison from Oregon, who tailed Taggart once he took the job with the Seminoles and added 4-star Defensive End Malcolm Lamar to round out the day. The class is impressive for Taggart’s first year on the job and really shows how well he can recruit.

Florida did belong here earlier in the day after losing the battle for Nicholas Petit-Frere to Ohio State, but recovered in the afternoon after locking in a pair of 4-star defensive ends.

Michigan however had the most disappointing day. The Wolverines lost a key battle with Otis Reese, who had been committed with the Wolverines since Juno of 2016. And to make it worse, they also lost the battle with rival Ohio State for Petit-Frere. Harbaugh was able to bring in a top 5 class in 2017, but ended just outside a top-20 class this year.

Tennessee also had a disappointing day, losing 3 5-star recruits and 2 4-star recruits to other teams. But HC Jeremey Pruitt was an excellent recruiter for Nick Saban in the past and should bring talent to the Vols sideline in the next couple years.

In other news, this happened today:

When mom doesn’t approve of your school choice. pic.twitter.com/sPvKBalHDT