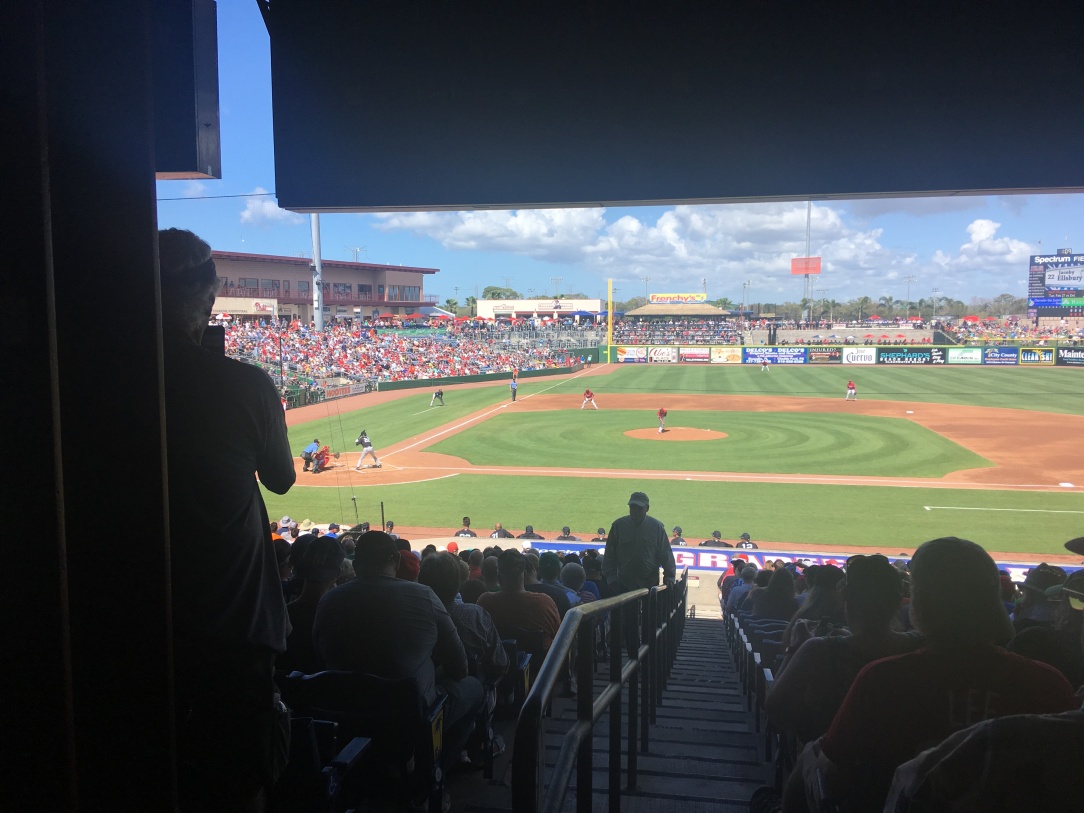 Sunny, 85 Degrees and a Great Weekend for Baseball

Sunny and 85, this week’s main story will be coming to you from Tampa, Florida. I had the opportunity to get in my first fix of baseball for the year with the Phillies vs Yankees spring training game at Spectrum Field in Clearwater yesterday along with 7,950 others.

Now of course I rooted for the non-Yankee team, but I must say the Yanks were a lot more exciting to watch. The young Yankee offense was consistent and persistent, with a team average on the day of .316 although their OBP wasn’t much higher as these kids loved to swing that bat and only drew 2 walks and struck out 9 times, leaving 18 men on base. This however pales in comparison to the Phillies whose offense was all over the place. They drew the same number of walks as they hit the ball with 4, and struck out a whopping 12 times, leaving 9 on base. However they did see some power from their third basemen Maikel Franco who was the only one to leave the park yesterday, and Cozens who seemed to be seeing the ball pretty well, picking up a double.

Taking a look at pitching may point to why the Yankees were hitting so much better, as the Phillies threw a lot of young arms that either have had no time in the big leagues or small rough stints there, with the exception of Héctor Neris who we got to see throw for the first time this year, and have a nice shut down inning. The most impressive arm for the Phillies that day however was Seranthony Dominguez who pitched for his first time ever in Spring Training or MLB yesterday, faced four batters and struck out 2 and allowed one to reach base on a hit. From what I could tell he was equipped with a pretty hard biting slider, a respectable fastball, and a changeup. I would be surprised if Phillies fans don’t see him in some late innings near the end of this season.

The Yankees on the other hand all seemed pretty impressive when it came to the mound, except Justus Sheffield who gave up the home run, and the batter beforehand, a deep fly ball that brought in a runner as well. All in all I’d say the Yankees are shaping up to be a pretty good looking team, as their bats and arms were at the ready yesterday, and the Phillies, well they have a couple of sparks to look forward to and a lot of young talent that still has to be molded. The biggest disappointment of the game was that Stanton, Sanchez, Judge, and Santana all did not make an appearance, not even a single at bat between them. But I guess I’ll just have to wait until the Yankees come to Chicago to get a good look at Stanton’s power although hopefully just one small display of it.

Some other news around the League that I should address, Eric Hosmer moving to San Diego, and Logan Morrison to Minnesota. Just when I think the white sox catch a break and a slugger leaves the division, another comes to take his place on an already scary team. Morrison although hitting his stride later in his career at 30 had a powerful 38 home runs last year and a decent .246 average. He is not really a direct replacement of Hosmer in the AL Central, however playing on a team like the Twins this year who are poised to run the division could mean bigger things for all of their arms and bats. Hosmer has averaged around 22 home runs, 95 RBIs, and roughly a .280-.290 batting average over the last few season making him a reliable and consistent rock for the Royals at first base, while playing every or nearly every game over the last 3 years. The Padres will now have that rock, and we shall see if they build a season or team around him.

View all posts by baseballodysseyblog

1 comments on “Sunny, 85 Degrees and a Great Weekend for Baseball”