2018 Preview of the Maryland Terrapins.

After a 6-6 season in 2016, Maryland was expected to be competitive in its 4th season in the Big 10. The season started out with 3 wins and the Terps only loss was to UCF. But in the first 4 games, Maryland lost QBs Tyrell Pigrome and Kasim Hill to season ending injuries. Then it all went down hill. After taking a big hit, the Terrapin’s 3rd string QB Max Bortenschlager went down with yet another injury. But after a strong recruiting period and with the roster back to full strength, Maryland should be poised for a explosive 2018 season.

Maryland cleaned up this recruiting season, grabbing 3-4 star recruits and 19 3-star recruits. This put the Terps with the 25th best class in the nation and the 5th best class in the Big 10.  Maryland’s top picks up include OT T.J. Bradley, DE Byron Cowart and Transfer LB Tre Watson. Coach DJ Durkin wanted to grow his defense and that he did. Cowart and Watson are excellent picks ups and should compete for starting spots instantly.

Both Kasim Hill and Tyrell Pigrome are back and most importantly healthy. All you need to see for the two are highlights from the first two games. Maryland had a balanced attack with a dynamic running game and strong passing attack. Which let to a combined 114 points in the first two games. The two went for a stunning 27-33 for 405 yards, one pick and 4 TDs in 2 and a half games. With a new offensive coordinator, this can only trend upwards.

Maryland scored 57 points a game in its first two games. Along with returning QB’s, the Terps return RB Ty Johnson (6.4 ypc, 875 yards), RB Lorenzo Harrison III (4.5 ypc, 622) and a receiving core that only got better, even after losing DJ Moore to the draft. The Offensive Line that started every game last year returns. The only difference in the offense would be OC Matt Canada, who Durkin brought in from LSU. Canada has had successful offenses at LSU, NC State and Pitt, where he beat Penn State and National Champions Clemson in the same season. If the injuries can be minimized, Maryland has a offense primed for success.

Last year, Maryland suffered injuries on the defense as well, losing Jesse Aniebonam for the season. Aniebonam was the Terps best defender and without him, there was no pass rush, ranking 3rd to last among Division 1 teams. Maryland did pick up freshmen and transfer talent, but it may not be enough. Maryland replaced 3 of its 4 linemen and its linebacker core is unproven. With none of last year’s safeties returning, DC Andy Buh will have a challenge to get the Terps ready for the brutal Big 10 east. 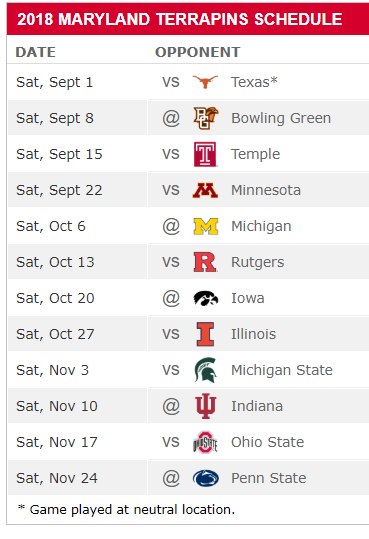 Maryland has a pretty balanced schedule, even if it is the gauntlet of the B1G East. It’s crossover games are Minnesota, at Iowa and Illinois. Iowa will be at Kinnick, where it will face a very tough Hawkeye squad that are looking to win the B1G West. Healthy QB play will be biggest concern for Maryland this year. If all goes well, the Terps have a good chance of going 7-5 and back to a bowl game.