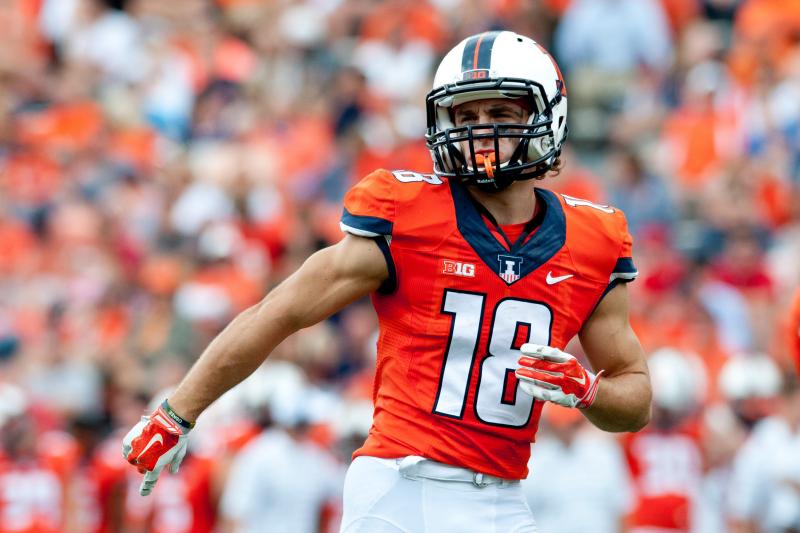 I am an Illinois alum, so this will be a complete in depth preview of Illinois Football. Today we will look at the 2018 Illinois Offense.

Illinois was one of the worst performing offenses last year. A large part of it was due to the inefficient quarterback play, but here are Illinois ranks from last year.

You get the point. Illinois basically punted on every play. Luckily we fired our old OC and brought in Rod Smith, who was the co-Offensive Coordinator at the University of Arizona. Last year, Smith had Arizona ranked 3rd nationally in rushing and created a 2 pronged attack with Khalil Tate and Brandon Dawkins who combined for 2323 yards, 19 TDs and 13 INTs in the air and 1870 yards and 20 TDs on the ground. This is the type of production we should see in a power 5 conference, especially in a conference known for its running backs (Ameer Abdullah, Ezikeil Elliot, Montee Ball etc.) Smith should bring a high powered attack to a young Illinois offense ready to make waves.

Everybody knows that the offensive line is key in creating running lanes and pass blocking to give time for the quarterback to make plays. Last year Illinois had 3 freshmen and 1 redshirt freshman start the 5 man line, something that doesn’t add up to a successful offensive line. Nick Allegretti is the only upperclassmen on the line and deserves all the respect he can get. He was recruited by Tim Beckman in 2014 and has seen the program at its worst. The rest of the line is riddled with freshman, who neither have the size, nor the skill to compete with elite defensive linemen like Nick Bosa. How this line adjusts in early season games will be crucial to the teams success.

The stats above may not say Illinois has talent at running back, but they do. Freshman phenom, Mike Epstein will return for his sophomore season, with a vengeance. Although he only played 5 games for the Illini last year, he led the team in rushing with 346 yards, 3 TD’s and averaged 6.07 yards a carry. Epstein will be the lead back, but will be backed up by Ra’Von Bonner and Reggie Corbin. Corbin averaged 6.1 yards a carry in his freshman year, but saw a drop to 4.3 yards and only 18 carries in his sophomore season, something we can attribute to Garrick McGee’s terrible use of personnel. The same lies with Ra’Von Bonner, who should see and uptick in usage with a more experienced line and better offensive play calling.

Illinois has an elite group of wide receivers, but the receiver’s success relies heavily on quarterback play. If AJ Bush can deliver, Illinois can make an impact down the field. Mikey Dudek and Ricky Smalling will be the leading receivers for Illinois. After Dudek posted a 1000-yards season in his freshman year, he spent the 2 season on the side lines with torn ACLs and was kept off the field last year due to injuries. Dudek says he is healty and is ready to go. Smalling was Illinois best receiver last year with 510 yards and 2 TDs. TE Louis Dorsey was the only other returning receiver to catch for more than 300 yards and 1 TD.  A huge part of this groups success goes to QB play so lets hope A.J. Bush (or any of the QBs for that matter) can deliver.

A lot needs to improve for Illinois to make an impact offensively. Steps were taken in the right direction by bringing in OC Rod Smith and QB AJ Bush. Illinois should be explosive this year, well at least more explosive than years of past, and that is something all Illini fans can hope for.