2018 Preview of the Michigan Wolverines

Jim Harbaugh has total control of his 4th year team. He has every single player he wants, and best a favorable schedule for the Wolverines. Last year, Michigan went 8-5 and were just left out of the Top 25 after ending the season on a 3 game losing streak to #5 Wisconsin, #9 Ohio State and South Carolina in the Outback Bowl.

Michigan had a down year for recruiting, coming in at 21st in the nation and 3rd in the B1G. This is after 2 consecutive top 10 rankings and top two B1G rankings. A large part of this dip is this is due to the amount of talent Michigan collected in 2016 and 2017. The class is led by 5-star line backer Cameron McGrone.

Michigan finally has its quarterback, atleast for the next few years, Shea Patterson. Patterson was a former 5-start recruit at Ole Miss where he played in 10 games and completed 60.7% of his 392 passes for 3,139 yards, 23 TDs and 12 interceptions and added 153 yards and 1 TD on the ground. This is compared to the trio of John O’Korn, Brandon Peters and Wilton Speight who had a combined  53.5% of their 349 passes 9 TDs and 10 Interceptions last year.  It is safe to say, Patterson will bring the heat and complete Harbaugh’s Michigan offense.

Michigan returns its top two running backs, Karan Higdon and Chris Evans who combined for 1,679 yards for 17 TDs on the ground. On the outside, Michigan returns Tarik Black, Donovan Peoples-Jones, Grant Perry, and Sean McKeon. The Wolverines also return 6 linemen with game experience. Patterson should be able to get in rhythm and have ample opportunity to spread the ball around. There is no doubt in my mind that Michigan’s offense will be better than the 105th best offense in the nation.

The one good thing about the Michigan team from last year was their 3rd ranked defense. In 2016, Michigan had Jabril Peppers, in 2017 Khaleke Hudson had a better season that Peppers and in 2018 Michigan has an entirely new lineup. Michigan has a pool of 4 and 5-star defensive players that have game time experience, which will come in handy as the season progresses. 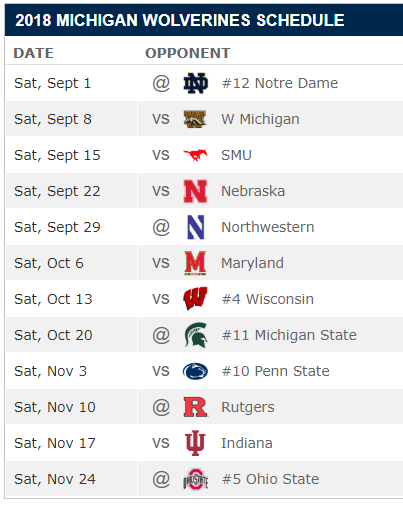 Michigan finally has its QB, in an offense that returns its key players in all positions. Michigan’s defense will be lethal. and the football gods have blessed the Wolverines with a balanced schedule. Michigan will start strong with the Game of the Night this Saturday in Notre Dame, but will then not face a ranked opponent until Mid October. Then they get a bye before playing Penn State at home. If Patterson works out (Michigan’s backup is Illinois transfer Jeff George Jr.), Michigan could easily be 11-0 going into its rivalry game against Ohio State.