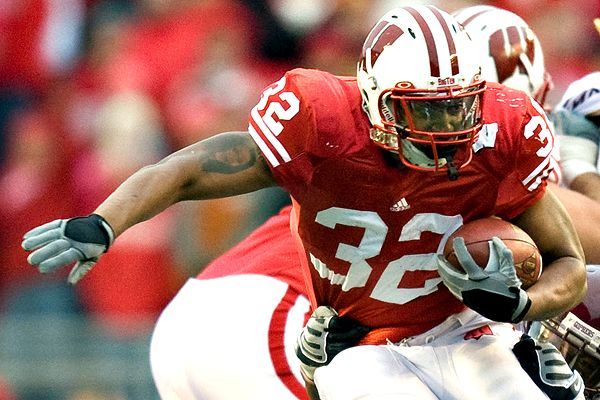 2018 Preview of the Wisconsin Badgers.

The Badgers are the definition of stacked. Yesterday we looked at the Michigan Spartans, and they return a top 10 defense, but Wisconsin, is a different beast altogether. Last year, the Badgers went 13-1, only losing in the Big 10 Championship to Ohio State 27-21. On the way, the Badgers had 3 10-point, 5 20-point wins, 3 30-point wins, and 1 40-point win and only win game by a margin of 10 or less. Last year Paul Chryst fielded one the best teams at Wisconsin in the last 50 years, can he do it again?

Despite Wisconsin’s success in the last decade, they only brought in the 44th best class in the nation, which was good for 9th the B1G. The class had 1 4-star recruit and 20 3-star recruits, led by inside linebacker Jack Sanborn out of Lake Zurich High School from the northern suburbs of Chicago.

Alex Hornibrook will lead the Badgers offense once again. Last year he completed 62.3% of his 318 passes for 2,644 yards, 25 TDs and 15 interceptions. But Hornibrook is a one dimensional QB and had -101 yards rushing. Wisconsin had the 92nd best passing attack in the nation, which is great for Hornibrook’s role as a game manager.

Wisconsin has one style of offense and that is to run the ball. In the last decade, there was only one time where the Wisconsin offense failed to produce an offense that had at least one 1,500 yard rusher. In the last decade, only one time did Wisconsin produce less than 3,300 rushing yards. This year, Jonathan Taylor will once again lead a potent rushing attack, behind an offensive line that has each Red Robin loving lineman returning. Behind the same line last year, Taylor had 1,977 yards on the ground and 13 TDs for a rushing offense that had 3,121 yards and 28 TDs. On the receiving end, Wisconsin return 3 of their top 4 wideouts, all of whom had more than 25 catches 400 yards and 5 TDs. This is a deadly Wisconsin offense.

Last year, Wisconsin had a Top 2 Total defense, a Top 5 passing defense and a Top 3 Rushing defense. The defense recorded 42 sacks (8th), 89 TFLs (33rd) and 20 interceptions (2nd, 2 went for TDs). Last year’s defense also allowed 3rd down conversions only 29.1% of the time (5th), redzone socres 71.4% of the time of which only 11 were TDs (5th and 1st), and only 123 plays of 10 yards or more (3rd). This was due to stellar linebacker play that returns 2 of 4 top contributors. Wisconsin will have to replace key players at cornerback, safety and defensive end, but there is no doubt in my mind that younger players will step up and bring back a Top 5 defense. 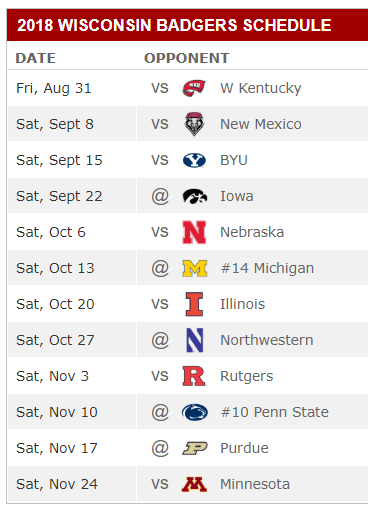 Wisconsin wont see Ohio State or Michigan State this year, which is lucky. Penn State and Michigan are also spread out far enough allowing players to recover. HOWEVA, the Badgers will play at Iowa and at Northwestern, both of which will be in hectic conditions. The Badger/Iowa game will most likely be a night game at Kinnick and the Northwestern game will probably be a 11 am start in Evanston. Both games have the propensity to wreak havoc for visiting teams. Wisconsin is primed for another undefeated season and a matchup with Ohio State in the B1G Championship. Will this be the year the Badgers finally make the CFB playoffs?